Goodbye to All That: Writers on Loving and Leaving New York by Sari Botton

The Manhattan expatriate gathered tales of love, loss and ultimately, change from twenty-eight female writers including Cheryl Strayed, Hope Edelman and Dani Shapiro. The 48 year old Long Island native lived in the city for over a decade before relocating to a small rural “hipster” town in the Hudson Valley with her husband Brian. 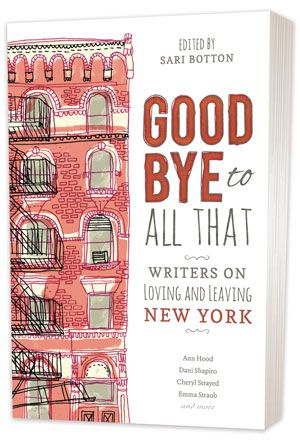 In an interview in Greenwich Village, Botton explained that the goidbye of having been a New Yorker leaves an indelible mark. Her former shoe-box-sized apartment on East 13th Street afforded her a place to live and write.

A chance meeting with him in person in the East Village led to brunch which led to Botton moving into his “below-market-value loft in a Gothic Victorian former yeshiva on Avenue B, across from Tompkins Square Park” a few months later. When their building was given Landmark status and the rent tripled, the decision to leave was easy. At first, life outside of New York City saari smoothly, but then the longing crept in.

Bottom enjoys patronizing local small businesses in her adopted hometown upstate and finds herself more productive creatively. Last year to celebrate her birthday, she got an Anais Nin quote “And the day came when the risk to remain tight in a bud was more painful than the risk it took to blossom. Lauren Jonik is a writer and photographer in Brooklyn, NY.

Goodbye to All That by Sari Botton on Apple Books

Review of Interstellar Bruja Vol. Your December horoscopes are here.

Poetry by Alyse Chinnock. Poetry by Sarah Serrano. A version of this article appeared on our old site.